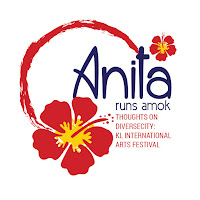 The trip began for me when the one and only Ramli Ibrahim handed me the slim brochure containing more than 20 world premieres in music, dance, theatre, traditional arts, storytelling, folk arts, food, fashion and more.

With Malaysia being the featured ASEAN country of 2015, the cultural vortex has become the capital city of Kuala Lumpur. For years, Malaysia, one of the most interesting crucible of cultures in South East Asia, has somewhat been nudged aside by its neighbours Thailand, Singapore, Indonesia, Cambodia and recently, Vietnam and Myanmar. To me, Malaysia is the most ASIAN of countries.. Not only does it have the essence of all its neighbours but it also has a fascinating history of Indian diaspora. More interesting but less successful in tooting its own horn than Singapore, the country has an amazing mix of creative talent that has been forced to fend for itself and find ways to promote and stay alive in a turbulent political climate.

For readers of this blog, the name that resonates is that of Ramli Ibrahim. Outspoken, admired, feared and respected, this Bhoomi Putra of Malaysia has had his share of challenges. Riding every rough wave with the tact of a champion surfer, Ramli is now one of the three artistic directors of DIVERSECITY, a word that puns on the very nature of Kuala Lumpur's DIVERSITY.

Leaving Chennai's horrendously clunky airport at midnight, I landed into the bustling KLIA in the early hours of Sunday morning September 6th. Making the mandatory stop at the phone store to procure a local SIM card, my adventures began soon after checking into the Federal Hotel in the heart of the Bukit Bintang area of the city.

Unpacking and some yoga breathing done, I felt calmer and prepared to have a traditional Balinese massage to get over the stiff limbs and slight jet lag. A quick visit to the local health store to stock up on some good snacks with yoga guru Sumitra Sekaran was another eye opener to the immense variety of foods available in the city.

When I visited 10 years ago for a performance of SEVEN GRACES and UTPALA, KL was an exciting city. The Petronas Twin Towers were an Asian World Trade Centre and Chinatown was a shopper's bargain heaven! Europeans, Americans, Brits, South Americans, Australians were swarming wherever the eyes could see. Ten years later, the diversity is still there but mainland China and South Korea seem to have embraced Malaysia and its fantastic golf courses with gusto. Apartments are being sold in blocks to golf addicts and the rising Asian super billionaire lot love this complex Asian country.  The European and other western presence is markedly less.

For artistes, this is the time to create and watch. And that is what brings me here for the next 2 weeks. To watch 14 world premieres and share my reports with readers. DIVERSECITY has already begun on September 3 with the world premiere of TEPAK TARI, a contemporary dance by MY DANCE ALLIANCE.  Today was the earliest that I could arrive, what with an important performance just under my belt in Bombay.

So KL.. here I am..Meet Anita Ratnam running 'amok' among artistes, dancers, chefs, musicians and other creative minds in this fantastic city!

PS:  The word AMOK is originally Malay. It was spelled AMUCK and has its origins in the 16th century from Malaysian-Indonesian sources. It used to suggest someone of a "warrior like courage." Today it suggests a kind of destructive madness - TO RUN AMOK".  In this instance I have chosen this word since the month long festival is planned to cause a real "stir" with the citizens and business community in Malaysia. So AMOK it is!